There's everyday wine. Besides are the wines to learn, taste, search through courses, places, and people. The first always had space on the table of the Italians: honest and without too many pretensions was simply wine. Then the wine list came, and another story began. 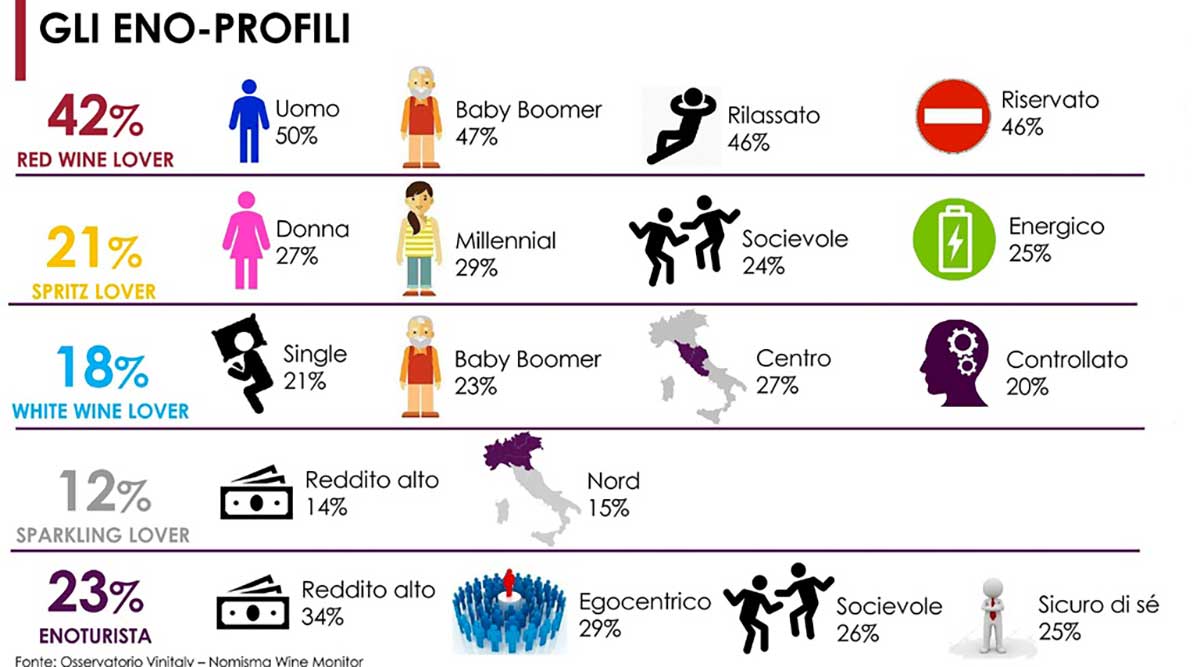 Italians drink the wines they know

Italians mainly drink the wines they know. Better if produced in their territory of residence. At Vinitaly 2019, the analysis of Nomisma’s Wine Monitor detailed the consumption habits of Italians. The present is sufficiently rosy, anyway, it can be useful to analyze the trends and consider to fill any gap, the knowledge of Italian wines above all. The gender difference also plays a role, partly filled by wine tourism. “Tell me what you drink … and I’ll tell you where you live”.

THE NUMBERS TO READ THE BEHAVIORS

“The survey carried out on the Italian wine consumer – said the head of Nomisma Wine Monitor, Denis Pantini – was developed in depth by areas, regions and large cities. It was useful to understand the trends of the national market. A  market that you cannot overlook. Not only for the value it expresses. Because the brand reputation of producers and wines – to assert on foreign markets – is built in Italy first “.

The picture investigated by the Vinitaly-Nomisma Wine Monitor Observatory refers to six regions (Veneto, Lombardy, Piedmont, Tuscany, Campania, and Sicily) and three cities (Rome, Milan, and Naples). And it shows a uniform country for consumption habits. With a slight prevalence in the North, where wine-lovers have a better knowledge of the product. The picture confirms that Italians mostly drink the wines they know.

The research highlights that the internal market is worth 14.3 billion euros in 2018 for a volume of wine sold equal to 22.9 million hectoliters. These figures place our country in fourth place after the USA, France, and the United Kingdom. The Italian vineyard measures 650 thousand hectares, with 406 wines under appellation, 310 thousand companies.

But much has changed in the evolution of consumption in Italy.  Among consumers between 18 and 73 years old – explained Denis Pantini – 88% replied that they had drunk wine at least once in the last year. A consumption that was 77% sparkling wine and the same percentage white wine, 76% red wine, 57% rosé, and 51% Spritz.

NORTH, SOUTH, CENTER: TO EACH HIS WINE…

The research also shows that regular consumers are loyal to red wine. Opposite, drinkers of other wines are more sporadic and drink on-premise. And then again Rome drinks white wines, Naples prefers red wines, and Milan loves the sparkling wines, in trend with the whole north. Surprisingly, the consumption of rosé wine finds fans in the Neapolitan capital and the Milanese one.  But generally, rosé wine has little audience throughout the peninsula. Spritz is making its way throughout the country, mainly among young people and for consumption on-premise. But to be honest, we should not count it among wines.

TRENDS FOR THE FUTURE

Among the “will be famous” in the next 2 – 3 years,  Italians indicate the autochthonous (28%), the organic (19%), the wines of Veneto, Piedmont, Tuscany, Puglia, and Sicily. The focus is on light, easy-drinking, and mix. This latest information indicates a trend in contrast with consumer tastes until a few years ago. Wine in the glass, but also in the countryside. 23% of Italians have made a holiday/excursion in a wine area, only 18% exclude this possibility in the future. Among the most popular destinations, Tuscany wins with Chianti and Siena, followed by Piedmont (Langhe and Asti) and Veneto.

A LOT OF WINE, A LITTLE KNOWLEDGE

Unfortunately, the comforting numbers on consumption do not match the consumer’s knowledge of wine. There are large gaps by gender and by area of ​​the country. The result is people mainly drink by “trend” or by tradition, confirming that Italians drink the wines they know and are unwilling to be tempted by new adventures. With over 400 denominations, the offer is impressive. However, only a quarter of the consumers say they can recognize what they are drinking: a portion that rises in males (33% against 18% of women), in the North West (31%) and directly proportional to income (45 %) and education (39% graduates). For wine tourism, the choice of the production region wins over denomination and grape variety. However, the three aggregated data add up to 61% of the answers and prove they are much more important than price, winery brand, sommelier advice, and “green” characteristics.

… EVEN AMONG PRESTIGIOUS AREAS

The differences in knowledge of great wines are even stronger: when asked about the regional origin of Amarone Della Valpolicella, Brunello di Montalcino, and Franciacorta, only 1 out of 4 Italians answers correctly. The geography rewards the Venetians (38% answers without errors), followed by Lombardy (34%),  the bottom is Sicily and Campania, where the threshold decreases to about 1/5 of the respondents.

WHERE DOES THE WINE TOURIST GO?

Interest in wine tourism is found among 23% of consumers, driven by 36% in Milan. The figure fits perfectly with the curious “wine-lover” and connoisseur of national wine. The slides below summarize this information well. You can consult them here.

The data provide interesting reflections both for producers and for operators in the wine world.

Whatever you look at it, the dissemination of knowledge has a slow impact, but investing in consumer knowledge pays off in the long run.